Klaus Truemper is Professor Emeritus of Computer Science at the University of Texas at Dallas. He started out at that university in Mathematics and Computer Science, but now also focuses on questions of philosophy. Below is a recent book on the foundation of mathematics. See More Books and Software for additional material.

The Daring Invention of Logarithm Tables 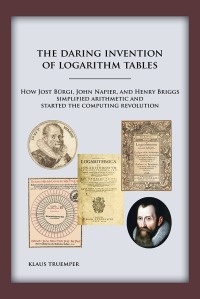 In the early 17th century, both Jost Bürgi and John Napier dared to invent a logarithm table whose construction required tens of thousands of computing steps.
The Daring Invention of Logarithm Tables tells the story of Bürgi’s and Napier’s work, and how Henry Briggs built on Napier’s idea, creating a table of logarithms that was easier to use.
It reconstructs Bürgi’s thinking leading up to his table. The reader looks over his shoulder, so to speak, and learns how Bürgi came upon the idea, how he decided on the specific format of the table, and how his instructions should be interpreted. And so the reader experiences the magic of the invention of logarithms.
The final chapters examine the question “Who invented logarithms?”. For centuries, few people were aware of Bürgi’s work; John Napier was considered to be the sole inventor. This changed at the middle of the 19th century when Jost Bürgi’s work became more widely known. Since then there has been extensive debate whether Bürgi should be considered an independent co-inventor.
Careful parsing of the history of logarithm going back to Archimedes of antiquity then reveals that, without doubt, John Napier and Jost Bürgi are independent co-inventors of logarithms.

USA: Order this book from Amazon.com
Outside USA: Select country and search for this book on Amazon International

The Construction of Mathematics: The Human Mind’s Greatest Achievement 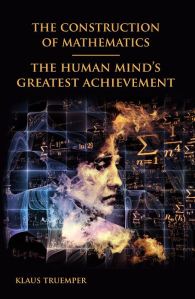 Is mathematics created or discovered? The answer has been debated for centuries. This book answers the question clearly and decisively by applying the concept of language games, invented by the philosopher Wittgenstein to solve difficult philosophical issues.
Using the results of modern brain science, the book also explains how it is possible that eminent mathematicians and scientists offer diametrically opposed answers to the question of creation vs. discovery.
Interested in the topic but intimidated by mathematics? Not to worry. If you are familiar with the elementary operations of addition, subtraction, multiplication, and division, you can follow the arguments of this book.

USA: Order this book from Amazon.com
Outside USA: Select country and search for this book on Amazon International